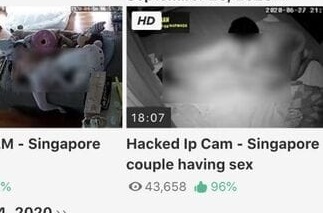 Security cameras in Singapore homes have been hacked, with the footage stolen and shared online.

Clips from the hacked footage have been uploaded on pornographic sites recently, with several explicitly tagged as being from Singapore.

The videos, which can last from under a minute to more than 20 minutes, feature couples, breastfeeding mothers and even children.

Most of them are in various states of undress or compromising positions.

Many faces can be clearly seen in locations such as the living room and bedrooms. Some are seen using the toilet with the door ajar.

In one video, time-stamped March 2020, a teenage girl can be seen in a white T-shirt and panties with school books around her. One of them is an O-level Ten-Year Series book used by students preparing for the exam.

In many videos tagged as being from Singapore, the homes have layouts typical of a Housing Board flat.

The footage appears to be from Internet Protocol (IP) cameras that are common in homes here. They are installed for security purposes or to remotely monitor children, the elderly, domestic workers and pets.

A closer check of the videos revealed that a group dedicated to hacking IP cameras was behind the hacking.

The group, which can be found on social messaging platform Discord, has almost 1,000 members across the globe.

As of Saturday, it has claimed to have shared more than 3TB of clips with over 70 members who paid a subscription fee of US$150 (S$203) for lifetime access.

The victims appear to be from various countries, including Thailand, South Korea and Canada. A 700MB “sample”, containing about 4,000 videos and pictures from the hacked footage, is provided free.

A significant portion of the clips seemed to be from IP cameras in Singapore…. read more

No products in the cart.